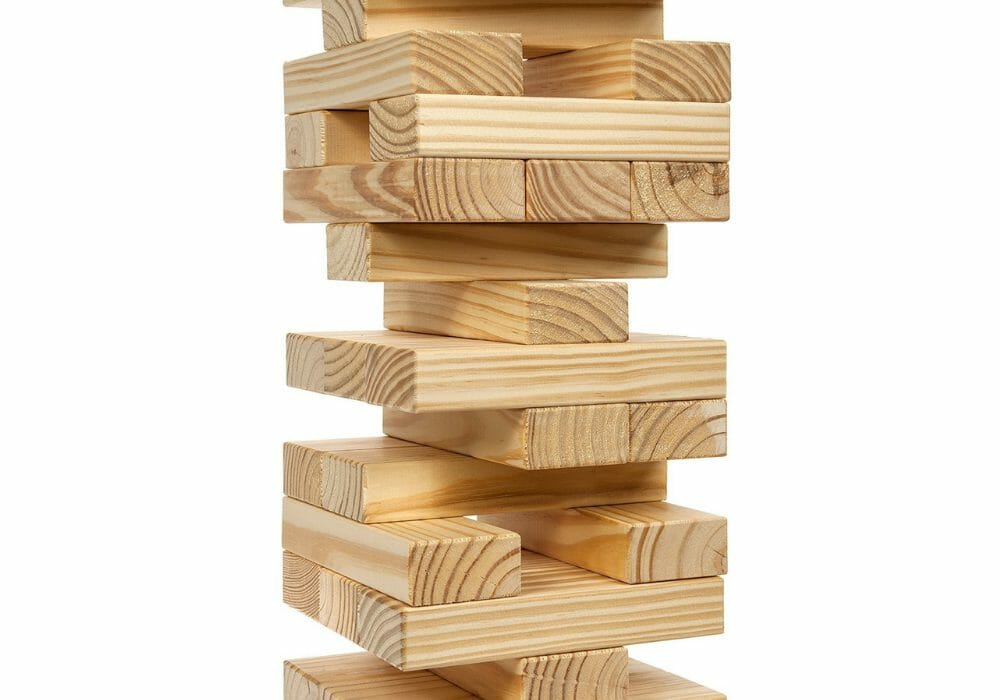 Have you ever heard of the game called Jenga? If not, here is a break down of how to play it. The game consists of many rectangular wooden blocks. These blocks are arranged to form a tall, rectangular tower. Players take turns removing one block at a time and placing that block on the top of the tower. The first person to cause the tower to collapse is the loser. Here’s a visual of how the blocks are set up:

Many people love to play this game (including myself), and a whole family can get together and have some laughs because of it. After all, there is usually a big uproar after someone causes the tower to collapse. And even though there is no clear winner in the regular game (unless you only play with two people), you can always play elimination. This is when you remove the loser of every round, until there is only one person left, a.k.a. the winner of the game.

There is a way, however, to turn a regular game of Jenga into a weed game that gets you high. This alternative game is great for those who want to get high, but are bored of smoking (or want to spice things up). You can play this game with your smoking buddies and have a great time, oh and also get really high.

How To Set Up

Setting the game up is fairly easy; if you know how to set up regular Jenga, then you are halfway done! The only difference is that you will have to write on the Jenga blocks. Write a command on each block. These commands should be related to marijuana, and be fairly simple. You could even write some fun ones to make the game more interesting. Here’s some ideas on what to write on the blocks:

You can use some of those ideas to write on your Jenga blocks (one per block). You do not have to use them all, just the ones that you think would be perfect for your game. Also, add some ideas of your own. Get creative and you can have lots of fun playing this game. Keep in mind that the more commands that your write about smoking weed, the higher that you and your buddies will get!

If you did not write on every single block, that’s okay, try to at least write on half of them. You could even write the same command on a few blocks. Once you have written down all of the commands on the blocks, set up the Jenga tower as it would be in a regular game of Jenga.

Once the tower is set up and commands are written on the blocks, it’s time to play! Play the game as it would regularly be played. But everytime a block with a command is pulled, that player must do the command. Use more weed commands to smoke more weed!

Make sure to have some marijuana set aside as well as a bong, blunt, joint, or however you are smoking. Then, when someone gets a “take a hit” block, they just take a hit from the weed and continue the game. The fun begins when someone has already become high from other blocks, then draws a “spin around in circles” or “close your eyes” block during their turn.

As in regular Jenga, the person to cause the tower to collapse is the loser. To spice things up, you could make a rule saying that the loser has to do something. This could be something like take a big dab, take a snapper, or something along those lines. Or, if you are playing elimination, then the winner should get a reward. This could be that they get to roll the next blunt, spark the next blunt/joint, or take a hit of their choice. The whole point is to get creative, have fun, and get high!

If you had enough weed and used enough weed-related commands on blocks, then everybody who played should be high when the game is over. If not, play again and incorporate more cannabis in the next games.

Weed Jenga is one of many weed games that can played with friends and get you really high. Did you like the idea of this game? What are some other games that can be played and include cannabis? Drop a comment below! Thanks for reading, and happy smoking!