In a previous post discussing strains, we talked about strains that are great for medical uses. The first strain on that list was Charlotte’s Web. Now, we are doing a strain review for it. The reason for that is because I feel like I was not able to go into enough detail about this strain. This strain is one of the few strains that actually have a story behind why it was created in the first place. So, let’s talk about Charlotte’s Web.

Some strains of marijuana are designed purely for medical uses. These strains tend to have a larger amount of CBD and a smaller amount of THC found in them. To quickly summarize the difference of the two, CBD is typically associated with medical purposes but doesn’t get you high, while THC gets you high and is associated with recreational use. Charlotte’s Web is one of those strains that contains a high amount of CBD, but a very low amount of THC. The reason for this is because it was designed primarily to treat medical conditions such as (but not limited to) PTSD, epilepsy, and seizures. There is actually a story behind the creation of Charlotte’s Web, read about it below:

The Story Behind The Strain

Charlotte’s Web was designed in Colorado for a young girl who was suffering from hundreds of seizures every single month. She had a rare form of epilepsy that caused her to have this many seizures. And, of course, her name was Charlotte. The ones who created this strain, known as the Stanley Brothers, looked into a way to create a strain that relaxed the body without giving off any mental side effects. They found this way when they created a strain high in CBD but very low in THC. Once they created the strain, they gave it to Charlotte to see if it would help with her seizures. It did, in fact, help treat her seizures by reducing them from hundreds a month to only a few a month. The success within this case grew quick in popularity, and many medical marijuana communities soon began to use it.

The success of Charlotte’s Web showed the importance of CBD in the medical marijuana field. Before she used Charlotte’s Web, the young girl had tried many other strains, and none of them seemed to treat her seizures. But once she tried the CBD-dominant strain, it helped her a lot, thus proving that CBD has more medical attributes compared to THC.

The strain was then named after the girl, as you already know. But where did they get the “Web” in the name Charlotte’s Web? Well, this came from the fact that the strain has a web-like appearance, with thick trichomes (small hairs in the plant) that wrap around the nugs. Check out a picture of a Charlotte’s Web nug: 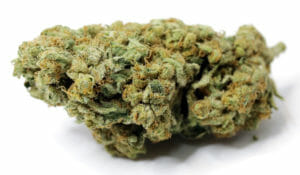 Notice the web-like appearance? If you can’t, then notice how the nug has a sort of white coat around it. That is the trichomes that give the strain its name (well, half of its name). The nugs of this strain have a very soft look to them, as they are very soft and fluffy. Just because the strain is CBD-dominant, doesn’t it cannot look like THC strains.

On the other hand, just because it looks like a THC strain, does not mean it will get you high. CBD and THC are very different chemical compounds found in marijuana. THC has to do more with giving you the feeling of a high, while CBD is used more for calming and treating medical conditions. So if you are looking to use marijuana for recreational purposes, you may want to stay away from Charlotte’s Web, or you might be disappointed in the high that you get from it.

Again, Charlotte’s Web is primarily used for medical purposes. If you are looking for a good medical strain, then try this one out. It is a great medical marijuana strain, and has actually saved the lives of many people. Thanks for checking out this strain review. Happy smoking!