There are many ways out there to dab. Now, I’m not talking about the dance move, I’m talking about smoking marijuana wax. You could smoke it out of a rig, out of a pen, out of a nectar collector, or out of the many other ways available. The problem with most ways to dab is that they require items that are either expensive or hard to get. Sometimes, people want to be a able to dab but not go out and get the stuff for it. For those people, I introduce knife dabs.

Knife dabs are a poor man’s way of dabbing. They are perfect for the times that you do not have the proper equipment to dab. You can take knife dabs with three items all found in a typical household:

Most people have a bottle, two knives and a stove in their house. A torch would be easier to use than a stove, but this is the poor man’s method, so let’s assume that there is a no torch available.

Of course, you’ll also need some wax (there’s no way around not getting that).

How To Do It

First thing you do is cut off the bottom of the bottle. Cut it so that the bottom is open and flat. Next, cut out a small opening on the side of the bottle from the bottom (it should look like you are cutting out a door). Your bottle should now look something like this: 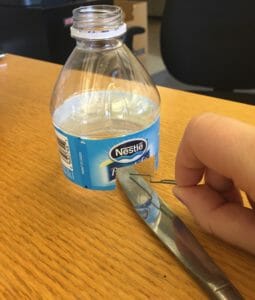 Notice how the knife fits into the opening on the side? That is how it should be. Make the opening big enough for the knives to enter, but small enough so that smoke does not come out of the sides. This is due to the fact that if the opening is too big, then more smoke will be able to escape from the bottle, meaning less smoke from that dab.

You may also notice that, in the picture, a paperclip is being pressed onto a knife. This is another way to take knife dabs compared to using two knives. We will explain both ways so that you can choose whichever works for you.

Once you have cut up the bottle, it is time to dab. Both methods of taking knife dabs are listed below:

Heat up both ends of the knives at the same time, and at the same heat (on the stove or with a torch). Once they are red hot (hover your finger over them to make sure they are hot enough, but be careful not to burn yourself), remove them from the heat, and now you can dab. But act quickly, since you need the knives to stay hot in order to take a dab.

Take your wax that you want to dab, and set it on one of the hot knife ends. Place the other hot knife end on top of the wax, so that the wax is sandwiched between both hot knife ends. Place both knife ends (still holding the wax) inside the bottle through the opening that you cut out. When the wax is placed between the knives, it will begin to burn and create smoke. Use the bottle to inhale all of that smoke, and press hard down on the wax with the knives. Once you do that, you have now taken a knife dab!

Using One Knife And One Paperclip

This method is very similar, but some things are different. Instead of heating up both, only heat up the knife. But since you are only heating up one knife, you need to heat it up much more compared to the method above. While the knife is heating, slightly heat the end of your paperclip. Make sure that you bend it how you want it so that it can hold a dab. Heat the end of your paperclip just enough so that it is warm, but not red hot.

Once the knife is done heating, place it in the opening of the bottle. Then, use your paperclip (with the end still warm) to pick up your dab. Place that on top of the knife (just like in the picture above). Inhale that smoke and then you have finished your knife dab!

You can take as many dabs as you want with these methods, just remember to reheat your knives for every dab. Now, this may not be the easiest or smoothest way to dab, but remember, it is the poor man’s way to dab, so it is only designed to get the job done.

Hope you enjoy those knife dabs. With some good quality wax and enough knife dabs, you can get pretty high! Just be careful not to burn yourself. Happy dabbing!

How To Use A Wax Cartridge Without a Battery