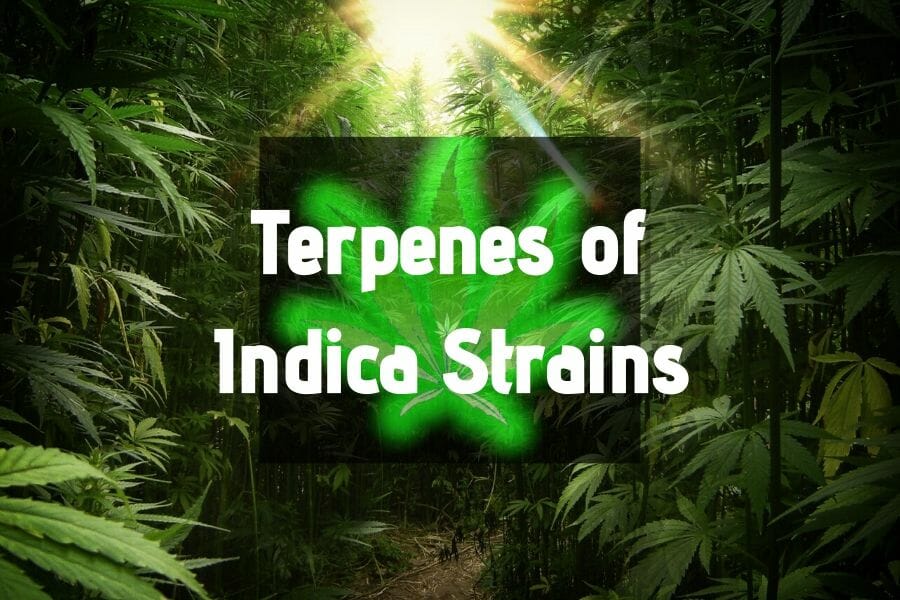 Terpenes play a huge role when it comes to cannabis strains. They can decide how the strain will smell, taste, and even some of the effects it will leave you with. Some terpenes are more common in only sativa/indica strains than others. For example, all of the terpenes listed below are mainly found in indica strains.

Why is it important to know your terpenes? Well, if you care about the flavors and aromas of your cannabis, then you can use terpene knowledge to pick out the strains that suit you best. Those who love sweet more than than bitter/earthy can choose strains with terpenes that make it sweet, or vice versa. You can also decide between uplifting or sedative terpenes, like the difference between sativa and indica. In fact, terpenes have a big contribution to why sativa and indica are different.

Before you go choosing your terpenes, you should first understand what a terpene is. If you already know about them, skip the next section and get straight into myrcene. However, if you’d like, please read below for more on what terpenes are, as well as a link to a full post about them.

Simply put, terpenes are hydrocarbons that are naturally produced in cannabis. They were originally developed in the plant as a defense mechanism to give off strong, unpleasant smells to animals who may eat them (though we seem to love the smell very much). So, terpenes are the reason why cannabis smells very pungent, or “like as skunk” as some like to put it.

Cannabis also has terpenes to thank for its flavors and even, in some cases, certain effects. As you will read about below, some terpenes cause a strain to give off uplifting, sedative, or other effects. Now, let’s finally get into the three terpenes that are quite common in indica strains.

Myrcene is one of the most common terpenes found in cannabis. In indica strains, that is. It is also found in plants and herbs, especially those with strong scents. Hops, mangoes, basil, thyme and some others all share myrcene with cannabis. Have you ever heard the saying “if you eat a mango before you smoke weed, it will increase your high”? This is actually true, and it’s due to the fact that myrcene in the mangoes and cannabis bind together and boost the THC in the strain, making your high stronger.

Related: Foods That Will Increase Your High

As for how myrcene affects cannabis strains, this is done in many ways. First off, myrcene contributes to the regular indica effects: calming and sedative. If you need help sleeping at night, myrcene can surely help with that. It also makes for a great stress reliever. Another addition that myrcene brings along is anti-inflammatory properties, which can add to the medicinal side of myrcene strains.

Caryophyllene (try that five times fast) is another common terpene found in cannabis. In fact, this terpene is very abundant in cannabis and can also be found in sativa strains, though they are most common in indica. Caryophyllene is known to give off relaxing effects, and can be used as an excellent pain reliever. It can also reduce inflammation. Some scientific studies have found that this terpene may even reduce the risk of brain diseases.

Flavors from this terpene are known to be very natural-like. Expect sweet, spicy, and even slightly peppery when smoking or ingesting a strain with this terpene. Caryophyllene is even found in black pepper and is what gives it its spiciness. This terpene can also be found in cloves and rosemary.

Last, but certainly not least, we have Linalool. This terpene, in my opinion, has a very odd name compared to the other terpenes, though there are some others that do sound similar to this one. Anyways, linalool is most commonly found in many flowers and spices (as well as cannabis of course). For centuries, humans have inhaled the scent of many plants and flowers for medicinal purposes. Often times, they are actually inhaling the linalool from the plant/flower, helping them to reduce stress and even depression.

Wondering about the tastes and scents of linalool? This terpene gives off more of berry aromas and flavors. It even gives off heavy flavors of grape in some strains, which is why some strains are heavily influenced by grapes and even named after them in some cases (such as Grape Ape).

So that was three of the most common terpenes found in indica strains. Of course, there are tons of other terpenes out there, and we could have made this list much, much longer. If there are any terpenes that aren’t on this list that you think should have been added, let me know! Hope you find strains with the right terpenes for you. Thanks for reading!