Cannabis comes in a variety of forms and textures. It can come straight off the plant, trimmed and just how most of us know it to be. Cannabis can be cooked and added to food recipes in order to eat it. It can also be used to extract the good stuff from and use that in a completely different form. We call those concentrates. These forms of cannabis are very popular among those who are searching for a strong high. They are ways to get super stoned, and in the same amount of time that it would take you to smoke regular weed. So, without further ado, let’s learn about some cannabis concentrates.

What Is A Concentrate?

Most cannabis concentrates are collectively known as wax. These “wax” concentrates are very similar to each other, which is why they have all been grouped together. The wax concentrates are those that have textures and colors similar to wax or honey. They are yellow to dark yellow and are very sticky. The primary way of using wax is by dabbing it on an oil rig or putting it inside of a wax pen. There are, however, types of concentrates that do not fall under the wax category. These forms are produced in a different way than wax, and can also be consumed in different ways. Check out the list below on different forms of cannabis concentrates. These are not all of them, only six of the most popular forms. Two out of the six do not fall under the wax category. Can you guess which two they are before reading on them? 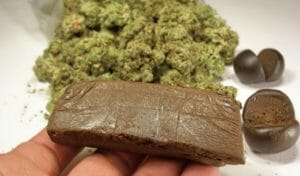 First on the list, we have hashish (or hash for short). Hash is actually the oldest method out there of producing cannabis concentrate. Its production originated hundreds of years ago in Northern India. It’s made by compressing cannabis resin under high temperatures and pressure into a single, solid form. It is a highly potent form of concentrate. Also, it is one of the concentrates that do not fall under the wax category.

Hash itself can come in many forms. There is bubble hash, charas hash, Lebanese hash, and a few more. Each form is made slightly different, but all result in some sort of usable hash that can be smoked, vaped, or even dabbed. Want to make your own hash? Check out our recipe for some easy, homemade hashish by clicking here. 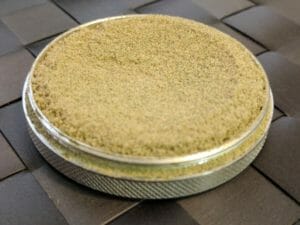 Next up, we have Kief. This concentrate is most likely the simplest form of concentrate out there. It’s also the easiest to obtain. Kief is small, sand-like particles that form on cannabis. If you use a grinder to break down your weed, then you may notice these particles inside your grinder. Don’t just wash them out, save them! They are actually highly potent in THC, and can get you a much stronger high compared to the weed that you got it off of. If you had the same amount in volume of kief that you did of weed, the kief would be much more potent due to its concentration of THC (see what I did there). It is also another concentrate that is not classified as wax.

If you have a grinder with a small compartment at the bottom known as a kief catcher, then you might already have some kief stored up. Unlike most other forms of concentrates, you do not need to compress, extract or anything of that sort with kief. Simply save it up from the buds that you break down and store it for later. One popular way of smoking kief is by making moon rocks out of it. 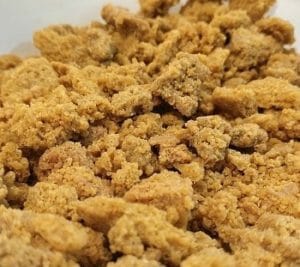 Now, we get into the wax concentrates. Crumble is another form of potent concentrate, and does classify as wax. It is a more solid form of wax, and is quite easy to dab with compared to other forms. This is due to its consistency. Most wax forms are very gooey, sticky, and hard to break off. Since crumble is the most solid form of wax, it is the easiest to break off and use when dabbing.

Crumble is made similarly to other forms of wax, however, with a twist. The main difference is the temperature of purging. After the initial extraction of solvent, the product is left on low heat so that the solvent can slowly evaporate. The process helps keep most of the flavors intact. After the process, the product gains a soft consistency (softer than most other forms of wax), but it is still brittle and can crumble when handled (which is how it got its name). 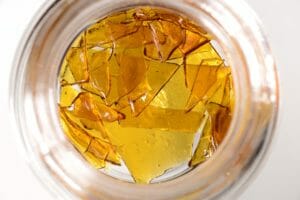 This form of wax may be the most popular when it comes to dabbing. It’s known as shatter. When most stoners talk about dabbing wax, they are typically talking about dabbing shatter. It’s nearly the same thing, the only difference is that shatter is only one classification of wax. It got the name from its consistency (like most of these concentrates). Shatter is solid, and like glass, it will shatter if you break it.

One way to tell shatter from other forms of wax is that shatter is the only one that is transparent. And just like most wax, it is very potent (you’ve been warned). It is mostly made from BHO and PHO extracts. Just make sure you are buying from legit sources, as homemade shatter may not be the best thing out there. 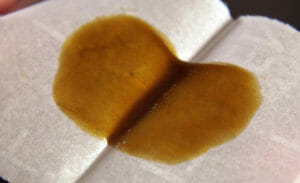 If shatter is not the most popular form of wax, then rosin may take that place. This concentrate is very similar to shatter, the only differences are the textures and how it is made. Rosin is very, very sticky. Do not get this stuff on your clothes, or it may never come off. When dabbing, the best thing to use is a metal pick to handle rosin, not your bare hands. But it is very potent, and calls for a great dab sesh.

You can actually make some homemade rosin pretty easily. The process is fairly simple; rosin is made by compressing cannabis nugs under heat to extract THC and CBD. This can be done at home with either a hair straightener or a t-shirt iron. Simply put some buds on a piece of wax paper and fold it over, so that the cannabis is covered from top to bottom in paper. Then, apply heat and pressure to the wax paper. The compressed buds will squeeze out resin, which you can collect and use as rosin. It’s as simple as that! 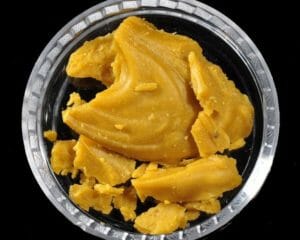 Finally, on our list, we have budder. No, not butter. This is budder, another form of wax. This concentrate is one of the most potent forms of cannabis that money can buy. It contains around 90% THC, which is a crazy amount compared to regular cannabis that contains 10-20% THC. This very high potency is enough to get you stoned after one hit. However, since it is one of the most potent, it is also one of the most expensive. The price is not only contributed to by the potency, but also the difficulty in making budder. The process is long and hard, just like the high given off from this product.

Of course, budder got its name from it’s butter-like consistency. It is much easier to handle compared to shatter or rosin, which also contributes to its popularity. Budder can be dabbed, or it can be added to a bowl, joint or blunt in order to enhance it. And it will definitely enhance it; prepare to feel that strong high.

So, which concentrate on our list was your favorite? Have you tried any of them for yourself? Drop a comment about it down below! Thanks for reading. And as always, happy smoking!

What To Do If Your Friend Gets Too High