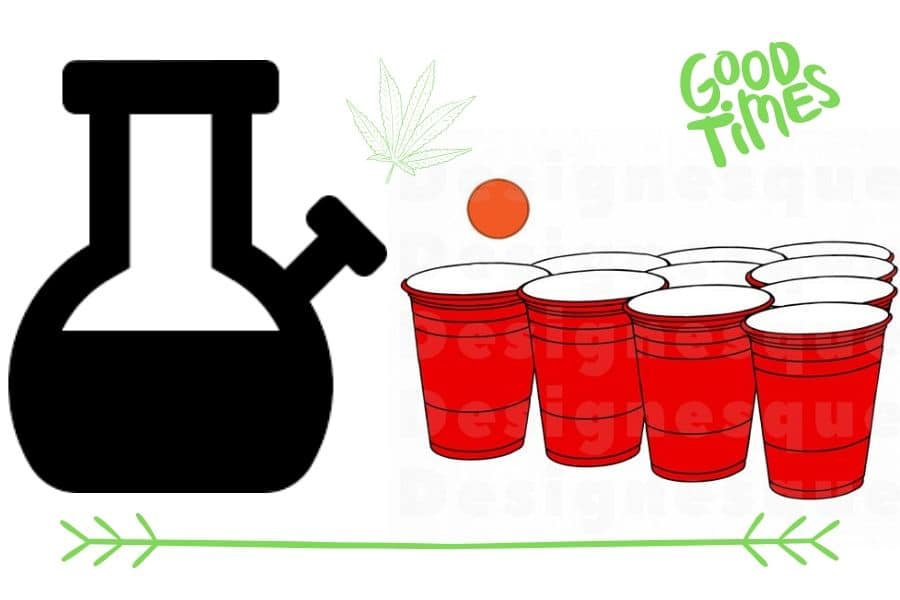 Marijuana games are fun to play with friends, and can usually get you really high. These games are for those times that you want to switch up the typical smoke sessions; instead of just sitting around and smoking, why not turn it into a game? There are other weed games that you can learn about here at Reefer Post, such as Marijuana Baseball, which is fun with friends and sure to get you high. Check out more by searching for games in the search bar! The name of this game is Bong Pong.

Now, you may already know what this game is going to be about. Yes, it is very similar to beer pong, but with a twist. This game can played at parties (just like beer pong), or with just a few friends. A minimum of two players are required for this game to work. If you know how to play beer pong, then you can skip the next section and get right to playing, just make sure you swap out all alcohol for marijuana!

How To Set Up

For those of you who don’t know how to play beer pong, or simply want a full description of bong pong, then keep reading.

First you need to set the game up before you can play it. Here’s what you’ll need to do that:

Once you have all of those, set up your cups like bowling pins. 10 cups should be at one in of the table, and 10 at the other end of the table for each player. Using a rectangular table works best. Set up your cups as shown below:

Once the cups are set up on both ends of table, it’s time to fill them up. You only need to fill up each cup about half way. You can use water, or you can also use cannabis drinks. If you use water, you don’t have to drink it, just leave it in there and take a hit of weed if your opponent makes it in. Using cannabis drinks, however, adds another twist and can get you even higher. Cannabis drinks are more expensive than just using tap water, obviously, so if you are tight on money or just don’t want to buy the drinks, then water works fine. But if you’re up for getting even higher than a regular game of bong pong would get you, then use cannabis drinks and drink whenever your opponent makes it!

When it comes to smoking, I recommend using a bong (hence the name bong pong). This is because a bong can give off large hits that can get you high quick, which makes the game even more fun. If you are smoking wax, use a rig to dab it. This will get you even higher than a bong, which could make the game more fun, or just make it harder to score.

Once the cups are filled up, you are finally ready to play! You can play bong pong in teams of one or two, so one versus one or two versus two. Each team stand behind their cups and prepares for the game to start. Stay behind your cups throughout the whole game. Set the bong (or however you are smoking) off to the side, as it will be used throughout the game. To start, either choose the team who goes first, or compete for who goes first. Do this by shooting a ball into one of your opponent’s cup at the same time that they shoot one into yours. Whoever makes it gets to go first.

On your turn, you will have both ping pong balls. If you are a team of one, you will shoot both. If you are a team of two, each of you will shoot one. Whether you make the shot or not, you can only shoot a ball once. If you miss, then nothing happens and the opponent team catches the ball. If you make it, the opponent must take out the cup that the ball made it in. Also, if the cups are full of cannabis drinks, the opponent must drink it all from that cup. They must also take a hit from the bong (or whatever you’re using), regardless if using water or cannabis drinks.

Once both balls have been shot, it is the other team’s turn to shoot. The same rules above apply to how each team plays. The first team to make it in all 10 of their opponent’s cups wins! Why not celebrate by taking a good bong hit!

After playing one game, you will most likely get high (unless your opponent didn’t score at all). As you play more back-to-back bong pong rounds, you will get higher, which makes shooting harder and more laughs from everyone.

Playing some bong pong with friends can turn a regular smoke session into a fun smoking game! Try it out for yourself. Enjoy your games, and happy smoking!