If you are reading this post on the day that it was published, then yesterday was Halloween. It was a night full of candy, screams, and dressing up. Of course, wearing a costume is arguably the biggest part of Halloween. Without them, trick-or-treating would not be near as exciting. And even though wearing a costume is more for the kids, us adults can still do it. Costume parties can be a blast, especially when there is a competition to see which one was the best.

For stoners, we can still express what we like during Halloween. True stoners know what to dress up as every year for this holiday: cannabis! Show off who you really are, while also being a jokester. Weed costumes are funny and allow stoners to show their true passion. Because if you love cannabis, you should dress up as it once a year. And even smoke some while you’re at it!

Need some ideas for some good cannabis costumes? Don’t worry, we’ve got you covered. Here is a list of our top 5 favorite cannabis Halloween costumes. Some of them even have links so you can grab one for yourself! 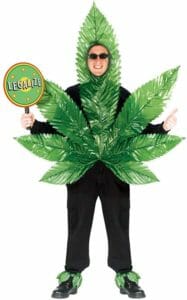 This costume is by far one of the best. What a better way to show your love for cannabis than to be a marijuana leaf for Halloween? And to top it off, you get a small sign that says “Legalize”. Simple yet expressive. I love it. I just hope that it comes with the glasses, incase you are smoking some and get bloodshot eyes. 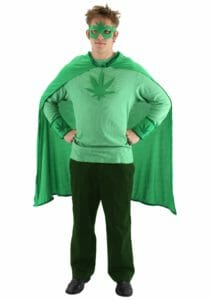 There’s no need to fear, weed man is here! Have you ever felt like weed has saved the day? Now you can return the favor by dressing up as weed man. He can fly, get high, and quickly eat an apple pie. Watch out Halloween, a new superhero is at the dispensary.

Nothing says I love weed more than dressing up as a bag of it. Hey, maybe the costume is worth as much as the amount of weed in there. Maybe it costs $30, even though it looks like more than an 8th of an ounce. It looks more like a quarter of a ounce, but there’s no way this costume costs around $70. 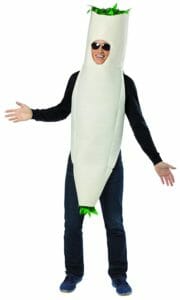 Maybe you’re like “I like weed and all, but I want to be narrow with my expression.” That works, too. If you like joints in particular, then dress up like this! Make this costume even better by putting some actual joints in your hands. Just be careful around others who may try and spark you up. 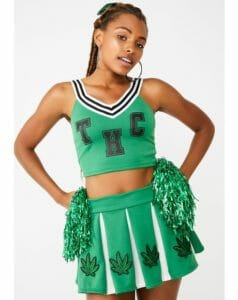 Here’s one for the ladies. Instead of saying you love weed, why not say that you support it? Support it enough to cheer it on, make it a leader in the medical/recreational communities (however you view it). Throw those pom poms up and yell cannabis at the top of your lungs. Okay, maybe not exactly that. But you can have a good time and possibly win a costume party with this one (unless the costumes above beat you).

Which costume was your favorite? Drop a comment down below about it! Thanks for reading. And happy Halloween to all!

The Perfect Temperatures For Dabbing

What Are Terpenes In Cannabis?